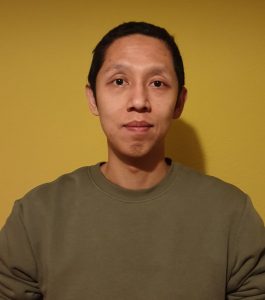 Did you practice any other spiritual/energetic philosophies or techniques before you encountered the Stillness-Movement System? If so, what were they?
I practised Falun Gong for 3 years, followed by 1 year of full lotus for an hour aiming towards a goal of reaching level 1 Mo Pai and Chi Power Plus. I also practised Pangu Shen Gong, and an esoteric system (which is like Reiki) called “EPA,” a German Energy Point Work. For about 3-5 years, I practised Fan Teng Gong by Master Guo Bingsen. I also did an intensive course with Sifu Wong Kiew Kit, and then went to Michael Lomax’s UK workshop.

How did you hear of the Stillness-Movement System, and what prompted you to attend your first workshop with Michael Lomax?
I am friends with Dr. Harald Lemke from various forums, and he mentioned a workshop that he would be visiting. So I bought Michael’s book, and I found that his system has many similarities with Sifu Wong Kiew Kit’s System. I had to decide whether to take Master Guo’s Nei Jing Gong system or to go to Michael Lomax’s workshop, as I could only do one neikung system at the time. But I found that studying under Master Guo would be very costly, and lots of spending on travel.

It was due to the advice of Sifu Dan Ferarra that drawing information from forms was not enough to develop enough Qi. So for three years I was practicing which I thought was a formidable form which required performing Wai Qi Liao Fa, but I felt it wasn’t very effective, despite practising two hours a day. I realized that the form did have some effect, but the effect was minimal without having learned a Medical Qigong form such as Nei Jing Gong. At minimum I used it to dispel toxins, prevent cancer, and for general health. At that time I developed my ability to sense Qi and reduced my chronic fatigue.

Through the system of Fan Teng Gong I started to build Qi. Since I lived in a higher floor of an apartment building, I cultivated enough Qi to be able to root my feet into the ground from up there. I cultivated the same level of Qi for my hands. I noticed that Qi that runs through the structure a building to the ground is different than Qi that is directly connected to the ground.

The problem I found with that system was the closing. I had to get the book “Zhineng Qigong” by Pang Ming in order to understand the technique of “lifting Qi and pouring Qi down” in order to “open up the the body with Qi,” which corrected the closing in Fan Teng Gong which required you to lift Earth Qi up and pour it through all through the body. It was not easy, each accomplishment has been done for hours at one time as I observed that the “prior state” wanted to come back. I practised so that I can gain not just temporary, but permanent results. I could see Qi, but only very vaguely.

But then I saw Michael Lomax’s light body glowing in dark when we were out to do the tree energy field palpation, and was wondering how someone can glow, but not leak, any radiance of aura.

When he performed energy projection, it looked like layers of paper made of light flowing on each other forming a cube. I found it interesting that while doing the practise, I had so much more Qi between my hands. After every time I practised, I felt energy increasing each time, which was amazing when I compared it with the Qi I developed with the other systems.

I actually found that it is not wise to look down on other systems. The Fan Teng Gong Qi is also very special. Although it produced Qi in very low amounts, those low amounts still pushed out toxins, dryness, wetness, coldness, and other pathogenic energy.

How long have you been practicing the Stillness-Movement System?
I have been practising diligently since the UK Workshop several years ago.

Describe an example of how Stillness-Movement System has impacted your life.
When I used to practise Fan Teng Gong, I still had chronic fatigue. With Stillness-movement, I got rid of chronic fatigue and developed a new sleeping rhythm. I need less sleep to be able to perform my daily work task. But when I do sleep, it’s without soreness, pain, aching. People wonder why I am so happy everyday.

Do you use Clinical Qigong (Waiqi Liaofa / Taoist Neuro-energetic Therapy) to heal others? Describe some of your results.
I had used it in the beginning when I helped a restaurant boss who had wrist pain, but his pain came back since he didn’t rest as I told him, and making the same mistakes after healing caused him the same problems. I used it on a martial artist, and actually projected qi through his worker boots. I also found that Qi works also through metal and other material. I projected qi on the knuckle of his nephew who also worked short time there. He had an accident and hurt his hand. I projected qi into his hand and the pain was gone. He was only fascinated that there seem to be a “hole” there, but not pain. Pain vanished by qi projection.

I pointed at my sister’s head with the “cold finger.” Even without looking she said she could feel qi.

Each time I did healings, it was only for 1-4 minutes long because of my job. So I do mostly “sneak-healing!”

What’s a fun fact we should know about you?
I tend to be attracted to qigong systems with inherently spontaneous elements. Many come from various countries, but are similar. Even without actively seeking these systems, they just come to me, even the non-Chinese systems.

There is so much to learn in so many ways.